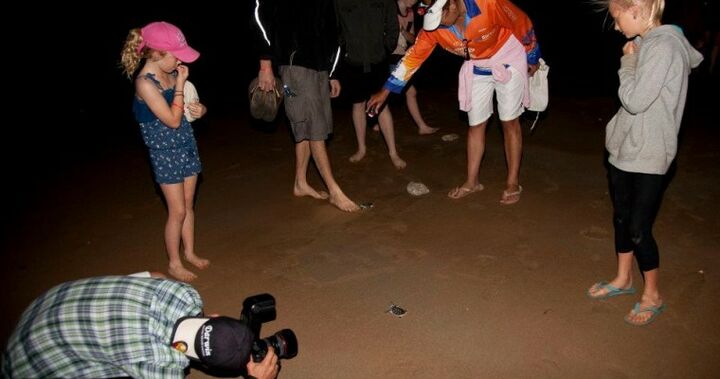 A full moon and Diana Prichard gets up-close-and-personal to egg-laying flatback turtles in the sand dunes on remote Bare Sand Island.

It’s close to sunset and one of the Turtle Tracks Tour party can only walk with the aid of walking sticks, so ambling along the beach of uninhabited Bare Sand Island – west of Darwin – in the hope of seeing flatback turtles come ashore and lay eggs in the dunes is a bit tricky for him. A chair and camp table are set up on the sand, so he can sit comfortably and enjoy a bento box dinner and marvel at the spectacular orange hues of the setting sun – while the rest of the party disappear down the beach in search of these ancient mariners, which habitually return to this part of northern Australia to nest. Suddenly, not one, but two little heads bob out of the water in front of the lone diner. Then soon, two turtles emerge from the shallows and slowly make their way towards the man, where they come to a stop – either side of his makeshift camp – and begin to dig their nesting pits.

“Turtles seem to pick a feature on the island when getting ready to come ashore,” explains tour guide Dion Wedd, who has a background in zoology and turtle research. “I have sat down with a group and had up to four turtles head straight for us.”

Welcome to Sea Darwin’s advanced eco-certified Turtle Tracks Tour, founded in 2008 by the affable Jim Smith, a former Tasmanian and Northern Territorian fish-farm manager and high-seas adventurer, who is now based in Darwin. After sailing around Micronesia with the family for an extended period a few years ago, Jim was inspired to follow that sea change with one of a different ilk – and on returning to Darwin, set up his boat charter and eco-tour business Sea Darwin, with the unique Turtle Tracks Tour, his piece de la resistance.

“We recognised that a lot of people love turtles and would go on a tour to see them,” he explains. And Bare Sand Island – a fast hour-and-a-half boat ride from Darwin – was the perfect destination, being a significant nesting ground for flatback turtles in Australia. The pristine, untouched island had only previously been frequented by fishermen, yachties and turtle researchers. Jim was keen to minimise the impact of a tour on the island and the turtles, so modelled his design on the scientific and ethical practices of Australian turtle conservation and research group AusTurtle. He also provides ongoing support for the group, with his tour guides recording turtle tag numbers, measurements, nest locations, nest excavation and the release of rescued hatchlings. “Combining research with tourism adds an extra dimension to the tours,” turtle tour guide Dion says. Tour group sizes are also kept small for a more personal, interactive experience, with no more than 20 participants at any one time.

Although the turtles lay their eggs in the sand dunes throughout the year, Jim operates the tours from April to October. They take place in the late afternoon and evening when the turtles are most likely to venture ashore to lay their eggs – it’s thought the cloak of darkness provides protection against predators. Tours are also conducted around the lunar cycle, with full and new moons the best times to see the turtles. On tour, you may also see the eruption of baby turtles, the hatchlings, from their homes beneath the warm sand, and begin their scramble towards the water.

My tour group leaves Darwin’s Stokes Hill Wharf in the late afternoon of a full moon on the custom-made canopied, open boat, the Snubfiin – named after Australia’s only endemic species of dolphin that live in this part of the world. With the warm wind in our hair and the smell of salt in the air, we skim out of Darwin Harbour and head west across a tropical reef, taking in the panoramic view of the rugged Top End coastal environment. As the sun is close to setting, the boat runs up to the beach and we alight down a ladder onto Bare Sand Island, which is literally just that, bare sand, with a single tree standing sentry-like in the middle. We wander along the beach with Dion and other members of Team Turtle – which often includes a traditional owner, a Larrakia guide – and learn about the turtles and the history of the island – during the 1950s it was used as target practice by the RAAF.

We keep our eyes peeled for a little head bobbing in the ocean or for movement in the shallows, while enjoying a glorious sunset. There’s no sign of turtles so we return to Snubfin for a bento box dinner and glass of chilled wine while Dion keeps watch on the beach.

Jim’s walkie-talkie crackles. Dion has spotted a couple of turtles making their way up the beach. By now, the glorious light of the full moon is casting a wide silvery path across the sea and over the island and we head back along the beach where we see Dion illuminated in the dunes. As we approach, sand is flying into the air at a steady pace as a turtle methodically digs her nest. We quietly circle the large labouring creature while Dion explains the process. “They use all four flippers when excavating the body pit, which removes the dry soft sand from where they want to dig the egg chamber. Then they begin digging the egg chamber, which is done solely with the rear flippers, which they use like a scoop – the left flipper excavates the right side and the right does the left in a very methodical fashion.”

Turtles are apparently very fastidious when digging the chamber, taking great care not to get any sand in the hole. “They even flick the flipper, removing any dry sand on it, before placing it down the hole and digging further,” Dion says. The whole process – hauling up the beach, digging the body pit and the egg chamber, laying, covering the eggs and returning to the water – can take about an hour and a half. “If they are disturbed during the process up until they are laying then it can really drag out,” Dion explains. “But once they begin laying, they rarely give up. They seem to enter a trance-like state at this time and this is when we can take measurements [for research] without unduly disturbing the process.”

It’s also when Dion can safely turn on his head light for us to see the laying process more clearly. “Turtles are extremely sensitive to light,” he explains. “They use the reflective hue of the ocean to find their way back after nesting.” Our turtle has dug her body pit and egg chamber and positions herself to begin laying. Dion clears the sand at her rear end for a better view as the glistening bluey-white eggs, the size of golf balls, plop out in swift succession. “Our aim is to enable visitors to have an experience with nature and handling animals increases the intimacy of the experience,” Dion says as more eggs drop into the chamber – we count about 40, but a turtle can lay as many as 50 in one session. “As long as the interaction is closely monitored and managed we don’t seem to have problems,” Dion continues. “Turtle Tracks has permits through Parks and Wildlife to interfere with the turtles. This allows us to open nests while turtles are laying, and to excavate hatched nests to see if any unhatched juveniles remain in the nests and to determine the success of the nest.” While a flatback turtle – which can live up to 100 – may lay up to 9000 eggs over her reproductive lifetime – about 50 a clutch and five clutches a season – only about two survive to adulthood! We’re gobsmacked.

Our turtle has completed her task, and rythmically and methodically covers her eggs with sand – filling in the chamber and pit – then turns around and begins her slow walk back to sea, passing another turtle making its way up the beach. We can almost feel its relief as it enters the water and glides away beneath the waves. “Their bodies are designed for swimming, not walking,” Dion reminds us. “However, nature is a funny thing,” he continues. “These animals have been doing this for millions of years and their body design is obviously right, otherwise nature would have selected a different approach.”

Our group wanders back to the Snubfin, collectively exhilarated after this close encounter with nature. We take our seat in the boat and skim across the glassy ocean to Darwin, the balmy night air wrapped around us like a soft blanket and the Milky Way a glorious ceiling of stars across the night sky. But there is no broader smile than Jim’s. “The delight people show when they have a great turtle experience is infectious,” he says.