The Naked Gunner Gin: Salutes a fine man and his mates, and the wartime Top End – the stuff of legends! 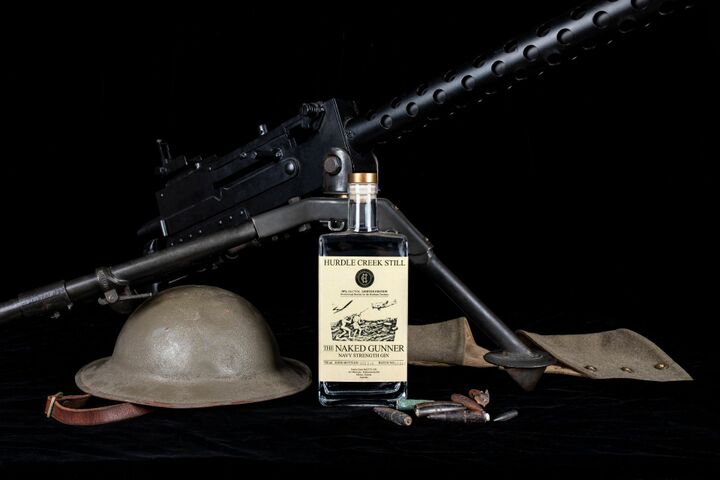 Mateship, bravery and the Top End are what legends are made of, and The Naked Gunner (aka Wilbert “Darkie” Hudson, who was a gunner with the Australian Army, stationed in Darwin, during World War II) embodies all of these elements.

In 2020 Sea Darwin is paying tribute to Darkie and his role during the Bombing of Darwin, with the release of Australian-made gin “The Naked Gunner” (which has nothing to do with current Chief Minister of the Northern Territory, Michael Gunner!). Sea Darwin's Jim Smith says: “It is a story that needs to be told. Only three per cent of Australians know the true extent of the Bombing of Darwin - there were more bombs dropped and ships sunk than at Pearl Harbour.”

On the morning of February 19, 1942, Darkie was in the shower when air raid sirens sounded: Japanese planes were dropping bombs on Darwin, bringing the war to Australian shores. Darkie leapt out of the shower, wrapped a towel around himself, pulled on his boots and hat, and ran to the gun site. He propped his weapon on his mate’s shoulder and began firing, his towel dropping to the ground. Darkie shot down a Japanese dive bomber, with his friends later teasing him about whether he shot down the plane or the pilot saw him naked and died of fright!

Darkie was awarded for his courage, receiving the Military Medal for bravery against the enemy on Australian soil. There is a memorial to him which now rests at Haileybury Rendall Private School, close to where the event happened, and one at Greystanes in Sydney, where Darkie lived with his family after the war. His family, including son Robert, continues to make the annual pilgrimage to the Top End on the anniversary of the Bombing of Darwin to honour Darkie’s service.

The Naked Gunner gin is a collaboration between Sea Darwin and small-batch gin distillery and family business, Hurdle Creek Still, at Bobinawarrah in North-East Victoria. Sea Darwin buys its all-Australian, appropriately named “Powder Monkey Navy-Strength” gin and relabels it, in memory of Darkie and the wartime Top End. Wendy Williams, from Hurdle Creek Still, says the gin was called Powder Monkey for partly historic reasons. “A powder monkey was a boy on board navy ships whose job was to carry the gun powder from the hold to the cannons in battle,” she explains.

The gin is made with barley and triticale (wheat and rye hybrid) and botanicals such as Victoria’s “Bobbie’s Patch” juniper, pink peppercorns, eucalyptus (picked from the majestic Blakely’s red gum growing outside the distillery) and lemon, cinnamon and aniseed myrtles. “It almost has an Australian bush, or crisp, clean flavour,” Wendy says. “It also makes the best hot toddy. And no matter what tonic you put with it; the flavour of the gin is never lost.”

At 58% ABV (alcohol by volume) – enough to set gunpowder alight – the gin packs a punch, much like Darkie’s act of valour. In the past, sailors would test the strength of alcohol, to make sure they weren’t getting a watered-down version, by pouring it on gunpowder and setting it alight. If the gunpowder burned, the spirit was “proved” - giving rise to the term “proof”, meaning it was at least 57.15% ABV.

“It is the perfect gin for The Naked Gunner story,” Wendy adds. “It’s Aussie botanicals, it’s nautical history and what better place than Darwin – a perfect, gin-drinking climate.”

The Naked Gunner navy strength gin is available for purchase from www.spiritsandstories.com.