The story of Bare Sand Island 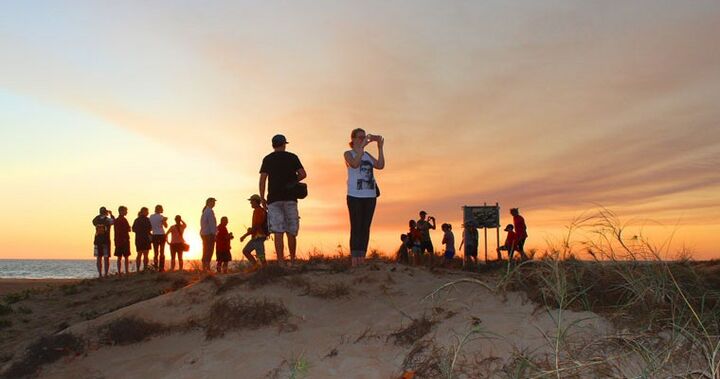 Shaped like a tear drop and holding stories of habitat, history and intrigue, Sea Darwin has been visiting Bare Sand Island with the permission of the Kenbi Traditional Owners since 2009. Mostly our visits are brief and for the purpose of showcasing this unique part of Australia to visitors. Mostly we leave in awe of nature and the pristine condition of the Northern Territory coastline. Sometimes though, we leave with thoughts that the story of the island and the turtles needs to be told so that the land is respected, and the turtles are protected.

In 2013 Sea Darwin was privileged to win the NT Brolga Award for Excellence in Sustainable Tourism. Sponsored by QANTAS, the $2000 prize money was to be spent on a project in line with the award. Sea Darwin decided that a meaningful spend of this money would be to develop interpretation signs for the island. And so we set about organising interpretation signs that acknowledged the Traditional Ownership of the land; that told the story of the island’s war history, and that provided information about how best to protect the turtles on this important flatback seaturtle nesting beach.

Firstly, Kenbi Traditional Owner approval for the concept was sought, and then key stake-holders were identified. The project was managed by one of Sea Darwin own Turtle guides, Sarah Burgess who is not only qualified in eco-tourism but has a passion for turtles and all critters, and wonderful skills in design. This project happened in Northern Territory time, but finally on a steamy afternoon at the end of June 2015 a group of significant stake-holders gathered on the sand-dunes of Bare Sand Island to unveil the signage.

It was a historic moment, as the Welcome sign was placed in the same location as where the “Danger Unexploded Bombs” sign had previously stood for many years. The removal of the danger signs signal that the UXO work on Bare Sand Island is coming to an end, and that the island is now safe for visitors. As well as being safe, Sea Darwin hopes that the stories of the island’s ownership and history will instil renewed respect for this significant drop of land, and will promote sustainable turtle tourism through the provision of information about turtle watching practice by tour operators and visitors to the island.