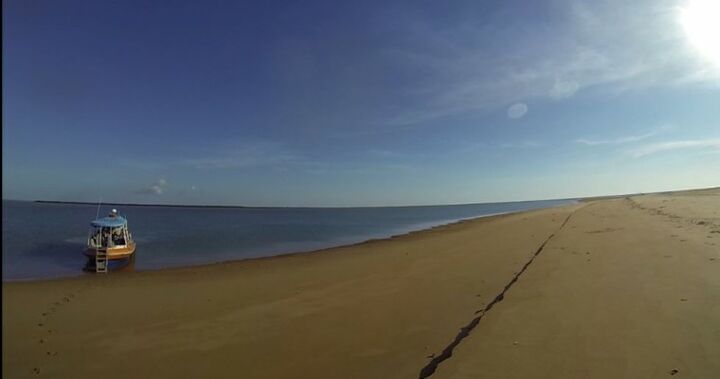 There is always a sense of anticipation in arriving on Bare Sand Island after the last of the wet season storms have lashed the sand dunes. This year a not so stormy wet season meant that there was little change to the shape of the dunes that we last saw in October 2014. There was also little change to the pristine nature of the island; until we arrived and left our footprints, the only disruption to the sand had been an array of turtle, crab and bird tracks.

On disembarking, our boat load of willing volunteers took a garbage bags and disappeared into the distance, looking to see what the sea had washed up. Surprisingly, there was very little marine debri this year, markedly less than last year, although the total weight of collection (69kg) was up on last year (48.3kg) mainly due to two large ghost nets that were retrieved. Plastic water bottles were again the main offender, with 25 on the beach, down from 44 last year. And this year we could have asked how many ski boots would be found, with one washed up in rather poor condition to join the collection of only 5 thongs (the same as last year). Joining our ski boot as an oddity, we collected a stubby cooler from the red centre, a combination lock in working condition and a mudcrab pot that had seen better days. The marine debri collected has been disposed properly, with some being recycled into art for our ticketing booth at Stokes Hill Wharf. The date from the collection has been submitted to the Australian Marine Debri data base, and the hazards for our turtle friends have been removed for this year.

Sea Darwin would like to thank the volunteers that travelled with us to the island for their help, and the Northern Territory Seafood Council who provide the bags for the clean up. Also appreciated was the input from Andrew from Austurtle who was with us, and who gave our guests a snapshot into the work of Austurtle on the island.