What to weather on your Darwin Harbour cruise 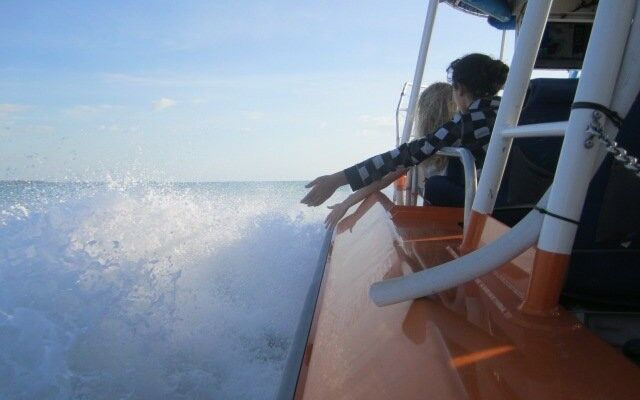 The Larrakia stories of the Dreamtime depict an epic interaction of the sun, the wind and the rainbow serpent. We haven’t come across the Rainbow Serpent yet, but here at Sea Darwin we know about the first two; the sun and the wind and what to expect on Darwin Harbour. It might be right that the daily peak temperature is mostly in the early thirties, but conditions on Darwin Harbour vary considerably between the seasons.

Our cruises within the confines of Darwin Harbour include the Sea Darwin Harbour Eco Cruise, and Australia’s Frontline. Australia’s Frontline is a short one hour cruise between Stokes Hill Wharf and Cullen Bay at 0930 in the morning, year round. In the dry season there might be some fresh south easterly wind that creates some seaspray, but on this cruise you are never far from the foreshore and 95% of the time it will be glorious.

The Sea Darwin Eco Cruise is either one, two or three hours. The cruise is tailored to Darwin Harbour conditions, and again, the occassional stiff south easterly might create some seaspray, your skipper will know where to go to maximise your Darwin Harbour experience in complete comfort.

Our Turtle Tracks Tour runs between April to October each year, for two reasons. Firstly, while the turtles nest on Bare Sand Island year round, May to September is their peak laying time. Most importantly, the unpredictable weather of the wet season that including sporadic storm squalls, monsoons and cyclones, means that venturing beyond Darwin Harbour during that time of year is not a good idea in terms of passenger comfort, safety and because the turtles seem to have a sixth sense and don’t come up when there is adverse weather about.

Generally on your Turtle Tracks Tour you can expect an enjoyable passage out of Darwin Harbour, with a few bumps around Charles Point, and a glassy passage home. We have experienced the occasional exhilerating and wet trip to the island (about one in ten), ocean surfing around the point, and the odd bumpy trip home. Similarly, we have had glassy trips both ways. Mostly the return journey has glorious views of the full moon or the milky way, very occasionally there is cloud cover.

What can we say about the legendary Darwin Harbour sunset. There are a plethora of Darwin Harbour cruises operating at twilight in the Dry Season, all for the simple reason that this is a magical part of the day in the Top End. Generally, Darwin Harbour experiences a sea breeze in the afternoon, which often gives way to a gentle evening with beautiful light in the sky. The Sunset Dreaming cruise is tailored to tide and weather conditions, all in order to maximise your experience and work with nature’s elements.